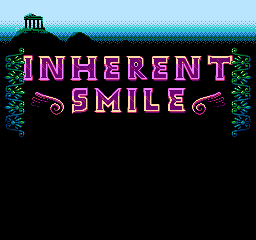 The game has the technical merit of being the first functional 3d maze game to be released for the NES. It also included two vastly different and ambitious subgames – a somewhat fully fledged RPG battle system with a hint of punch-out type timing mechanics, and a character dressing game. More on that later.

As it turned out, i was a tad naïve both when it came to available time and just about how much animation and inventory data we could fit into the compos’ mapper restrictions along with the game, and so some things had to get trimmed or cut out altogether while some other things were left a bit unfinished. The files are sitting in a dark corner of my project folder so i thought it may be time for a little show and tell. I honestly don’t remember exactly what made the cut and in what shape, but here’s some highlights and design-wise points of interest regardless whether they made it or not:

Most famously the final boss was missing (on strike, as the end text would tell you). It was to be animated on the background layer with the help of scrolling. The player would stand on a cliff on the sprite layer. I thought i had a mockup of that but can’t find it at the moment. So here’s just the background layer.
Note that the tail goes missing in a few frames – it’s not for any technical reason, but rather that i never got it completely finished. The punch out nature of these RPG battles would’ve become apparent in this battle if not earlier, since the minotaur is literally finting and punching as its standard attack.

Given the amount of time i spent on it, don’t be surprised if i recycle it into another project.

Here’s a snapshot from my workspace including the cliff. It also shows the spriteset in some state. To fit it all, i opted to reuse some tiles from the cube enemy in another palette as part of the cliff. 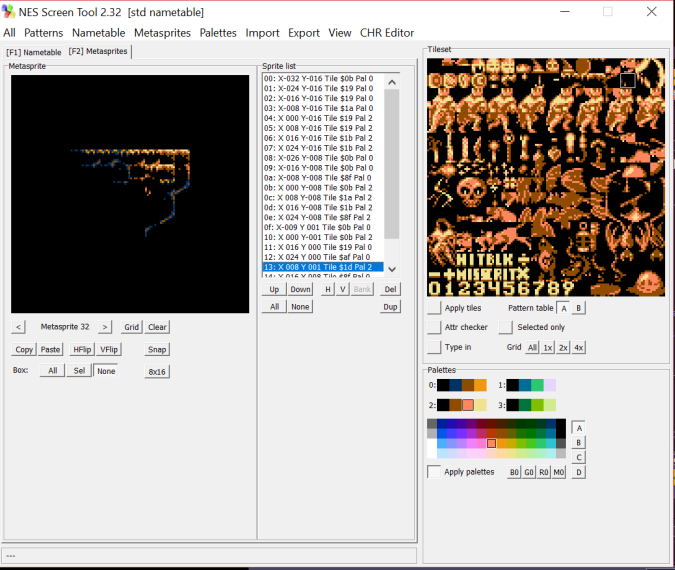 The sneezoid had a bit more detail to its jump as i recall it, but it still was fully functional.

The possessed lantern would have three subtly different patterns to hint at actions and when to time a block. It was made with position animation. of just 4 tiles, which helped:

I don’t recall if all of it made it, or just a subset.

I don’t think this lightning spell got into the game quite this way, but either way i’m not terribly proud of how it turned out – it was a bit of a rushjob towards the end, iirc. Compare it to the mockup of electric arcs in Project Blue, which looks and feel more natural:

On the other hand, the electric attack in Inherent Smile was made using only a a couple of tiles thanks to the help of mirror bits, so it’s resources are well justified. I didn’t get the animation pattern quite right though.

Here’s a funny one. The bat didn’t make it into gameplay at all iirc, because we simply didn’t have more room to spare for animations. It was a blessing in disguise because i wouldn’t have had time to fix that very pelvic nature of its attack. You can still find the tiles in the ROM, i believe.

The ghost was to use this wavy pattern when preparing spells – it’s a little bit cheap but works okay. It did make it into the game in some form, but not quite as was planned iirc.

I originally had fantasies about animating this molten iron river, but quickly realized there were more important priorities.

One thing i’m particularily proud of was the paper doll dressing subgame – equipping different items would visibly alter the character. There were even colour coded set items. It worked because of careful placement of enemies and player on the battle scenes.
Here’s the basic unequipped player running.

And here’s a still frame of the player attacking with equipment.

He’re some of the possible combinations of gear – the player would pick and experiment freely. Unfortunately, we didn’t find the time (or space) to balance it against the general difficulty scheme. The easiest way to beat the game is to find the exit quickly, rather than taking time experimenting. It’s sort of hard to describe, but there litterally wasn’t even a handful of bytes left to make it more nuanced. 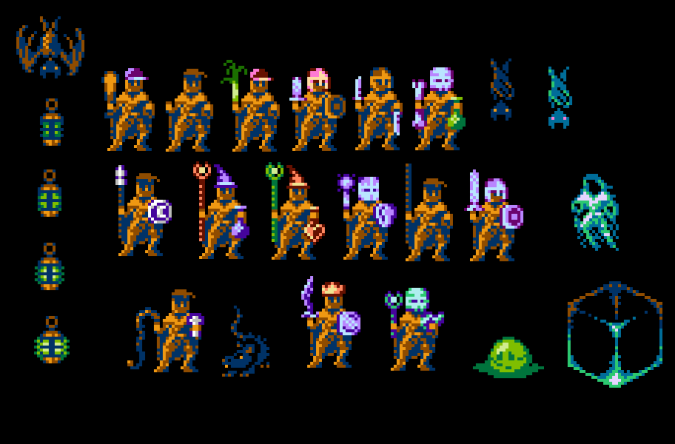 All of these items and more were in the game iirc. Again, the bat didn’t make it.

Here’s the rat taunting you. I remember that was in the game.

The vines on the title screen, just like the general theme of the game was inspired by greek mythology, was inspired from a classic-time greek ornament. They were put on the sprite layer:

For those who’re interested in the game, it was part of NESdev compo 2017 and combines realtime 3d maze crawling with said paper doll system and RPG battles with a little nice touch of timing attacks and blocks. The game is part of the next action 53 multigame cartridge, once it is released. Thanks to calima for having me along the adventure of making it, and for angelic patience towards the end.